On January 22nd, 1944, a young—and puzzled—doctor was in Italy participating in the Battle of Anzio. On Anzio beach, between shots and explosions, the young doctor had to decide which soldiers to give the scant sedative to. He asked the wounded soldiers directly if they needed the powerful narcotic. “Soldier, are you in pain? Do you need morphine?” Imagine the situation of being injured in battle: Would you accept that morphine?

A surprising 75% of the wounded soldiers replied “NO.”. This didn’t make any sense. Before the war, our physician had been working as a doctor in a clinic in Boston and had seen, more or less, the same kind of wound. But there, these types of wounds produced unbearable pain for his patients, who needed high doses of morphine. For some strange reason, the intensity of the pain associated with being shot is lower on the battlefield than in civilian life.

What can explain this phenomenon? The pain you feel when injured by a bullet does not have to do only with this—it also has to do with the story we associate the injury itself with. Now think about these two possibilities:

In our first story, you’re a soldier who is shot and wounded. Your first thoughts after the shot would go something like this: “Shit, I’m injured! Wait a minute… I’m still alive. I can be evacuated from here, I’ll receive recovery treatment, they’ll take me to the hospital, I’ll get a medal and a pension, they’ll send me home and I’ll be a hero”.

Now, in the second story, you’re a regular guy living in a city and running a store you own. You’re mugged and you get shot. Now your thoughts after being shot are very different: ““I’m alive. What’s going to happen to me now? How will I pay the medical bills? Will I lose my shop? Will I be able to pay the rent? This shot is not going to bring me anything good”.

The same bullet, two different stories. It is the difference between the stories which changes your feeling of pain. You can find this story, narrated by Dr. Daniel Carr, la puedes encontrar en in this episode of RadioLab. Today I want to talk about “Storytelling”, about the power of our products’ and services’ stories.

Every great product begins with a great story

The heading of this section is UX designer and writer Sarah Doody’s motto. Sarah has a phrase I completely identify with.

I’m a user experience designer. And a product strategist. (but I realized that I’m a storyteller ﬁrst).

Sarah Doody
The Need for Storytelling in User Experience Design

I believe I’m a storyteller (when I’m allowed to be, which isn’t always). This blog is, in part, a reflection of that. Oftentimes, we join projects which are already underway. Other times, projects rocket through to the implementation phase, without enough time or research to find a story that is strong enough to underpin them and give them meaning.

After the first idea for a product, the rush to the “How?” and the “What?” starts, and it proves to be hard to place the focus on the “Why?” Then, lists of functionalities appear and value propositions disappear. These functionalities become the project itself, and the project—far from adding value—turns into a ton of pages with transactions that don’t provide any real benefit to the user. The product has lost its opportunity.

It doesn´t matter how good your (engineering) team is if they are not given something worthwhile to build.

How is a story created?

Our products’ stories are also designed, They don’t emerge without our intervention. The narrative structure of stories is very well known, and its effectiveness has been thoroughly tested. A product that goes unnoticed or doesn’t move its audience should have its narrative structure immediately revised. Stories that do hook people in settle in our users, and they establish an emotional bond between them and our products. A change in the product is a change in its story, and should be handled with extreme care.

Peter Arnel and his “Brand Architecture” Arnell Group, won the contract of the century. Their mission was to redesign Pepsi’s logo and to create new packaging for Tropicana. The new Pepsi logo sparked mixed reactions, but the new Tropicana packaging drove its customers crazy. Tropicana’s old packaging was a familiar image in supermarkets, an image that many American families put on their table at breakfast.

Just like with the redesign of Pepsi’s logo, Arnell wanted to transform that story into something cooler. Sans serif fonts, white spaces and the feeling that this is not a juice—this is the new iPhone5 box. The product’s story had gone from the familiarity, warmth and ritualism of breakfast to a strange, pseudointellectual idea of what a 2.0 juice should be. Users did not take long to react, and PepsiCo was forced to go back to its original packaging. 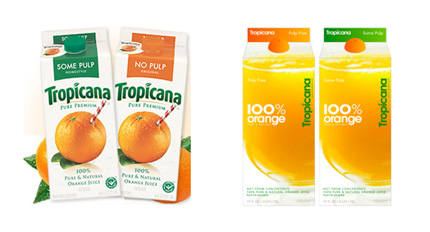 Hidden behind many experiences are narrative structures, which are used to send messages to consumers. The stories are not always visible or apparent at first sight. Think for a moment about Apple’s packaging.

Buying an Apple product and opening it involves a series of interactions or layers that follow a storyline which we advance through, overcoming little crises. Finally, we reach the climax of the experience, obtaining our iPhone. All these interactions converge, forming a longer story that Apple hopes we establish an emotional connection with.