On October 30, 1974 in Kinshasa, in the “The Mai 20 Stadium” the greatest boxing match of all time was held, known as “The Rumble in the Jungle“. George Foreman undefeated world heavyweight champion, faced Muhammad Ali, former world champion and title contender. Foreman was the clear favorite, but Ali, by using an unexpected strategy, emerged victorious and caused a demoralized Foreman to retire prematurely from boxing.

In 1974, Muhammad Ali’s time seemed to have passed. The year before, Ken Norton had broken Ali’s jaw, and two years earlier, Ali had lost to Joe Frazier. Foreman, on the other hand, was at the height of his career. He’d had no problem knocking out Norton and Frazier in the second round.

Ali was known for his hyperbole with the press. Months earlier, he had bragged about his speed and about how fast he would finish that fight. Foreman expected Ali to come out like a whirlwind, which is why he was more than prepared. The first round seemed to confirm that. Ali was jumping all around the ring and throwing an extremely fast combination of blows—which didn’t affect Foreman at all.

Everything changed in the second round. Ali sought refuge on the sides. Foreman threw punches that Ali dodged, leaning against the ropes and strongly protecting his face. The blows that did reach Ali lost most of their energy, which was absorbed by the elastic ropes and not by his body.

As the rounds continued, Foreman went from surprise to frustration. The champion threw punch after punch, in an interminable succession that didn’t reach his opponent. For his part, Ali wouldn’t stop shouting out sentences like: “They told me you could punch, George!“, “They told me you could punch as hard as Joe Louis.“, “Is that all you got, George?“… Foreman, angrier and angrier, was leaving all his strength against the ropes, round after round.

In the eighth round, a completely worn out and psychologically frustrated Foreman received the extremely fast counterattack that knocked him out. After that defeat, Foremen fell into a deep depression and hung up his gloves at the age of 28. Ali, meanwhile, regained the championship title with a new technique that has been known since then as “Rope-a-dope“.

In the competitive world of modern products and projects, it seems obvious that finding the right strategy that makes you stand out and be more attractive than the rest of your competitors is fundamental. However, we see products and projects that are virtually the same, with very similar strategies.

How the Weak Win Wars

A fundamental part of the strategy is knowing who you are up against and under what conditions. It’s not just about comparing competitors or taking stock of characteristics. By benchmarking benchmarking, you’ll know if you are a powerful competitor or a small competitor. Never say there is no competition. As @pixelado always says to me, “If you don’t find competitors, then you haven’t looked hard enough.“.

Conflicts in which one of the participants is at least ten times more powerful than the opponent are called asymmetrical conflicts. This concept comes from the war studies (PDF) carried out by Professor Ivan Arreguín-Toft of Boston University’s International Relations Department. According to Arreguín-Toft, over the last two hundred years, 71.5% of all military conflicts have been won by powerful armies—which leaves us a surprising 28,5% of conflicts won by small competitors. In all the cases he studied, the unexpected winner refused to fight under the conditions of the Powerful one. Small competitors seek new strategies, quickly analyze the data obtained and re-adapt their strategy to the new scenario.

Knowing that you are the small competitor facing the major ones should completely reframe your strategy. Playing by the rules of the large competitors guarantees you’ll be defeated in a very high percentage of cases. Being small is a major disadvantage, which at the same time frees you up to create new, unexpected rules of the game. Not being able to compete on equal terms allows you to try things that have been rejected by the competition.

If a product’s or project’s visual aspect were the determining factor for its success, we would not find examples of ugly developments that triumph. Yet we are surrounded by examples like these ones: 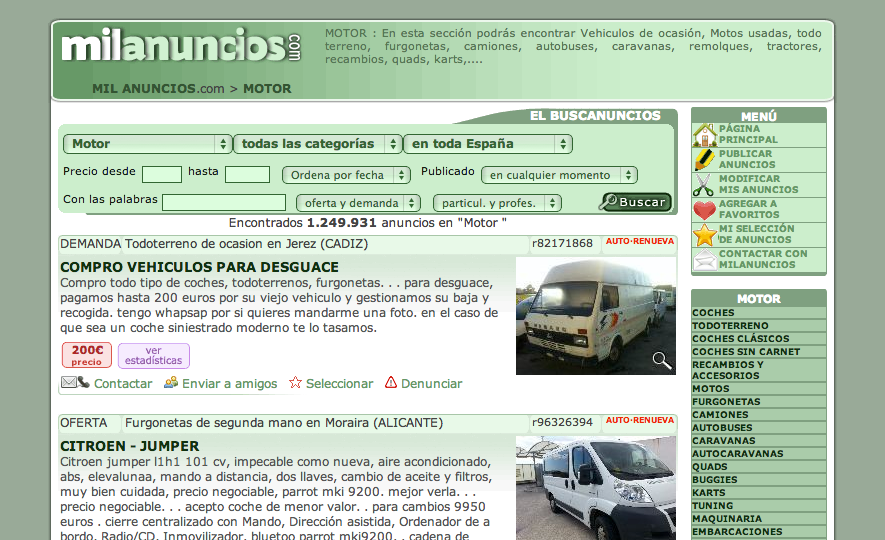 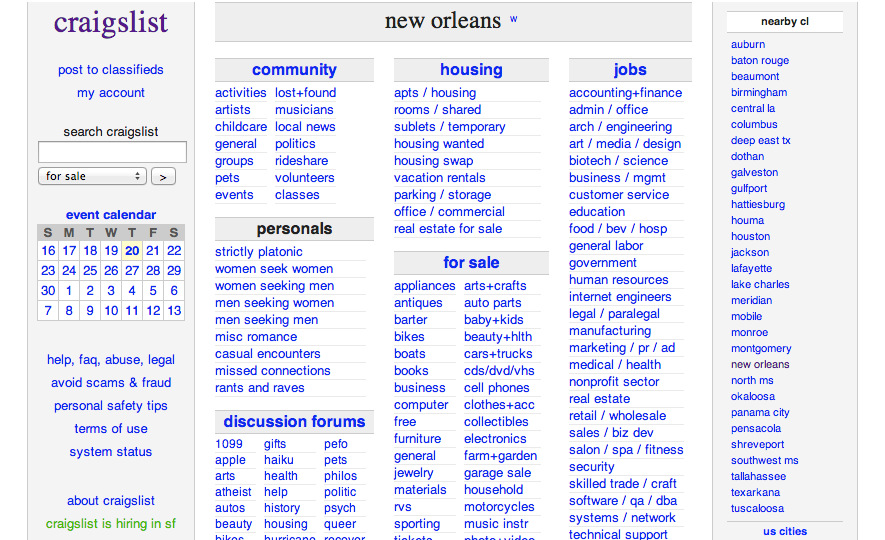 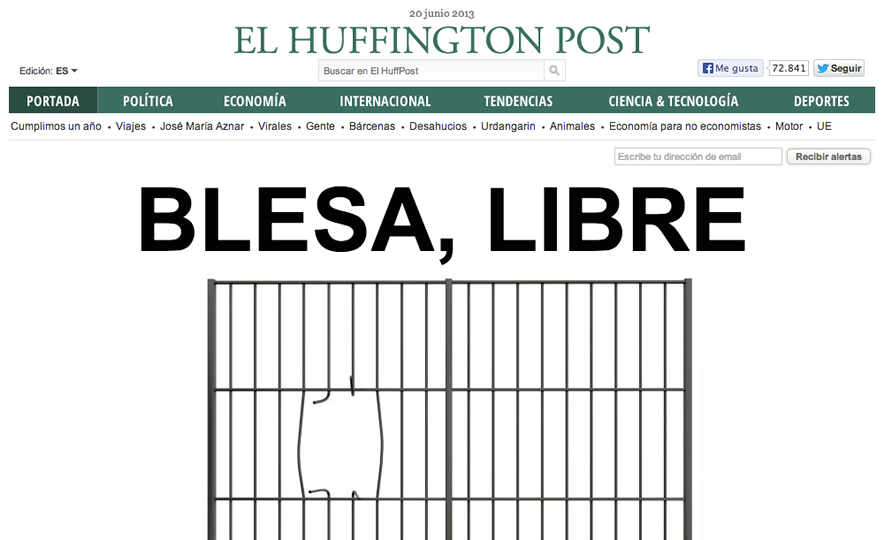 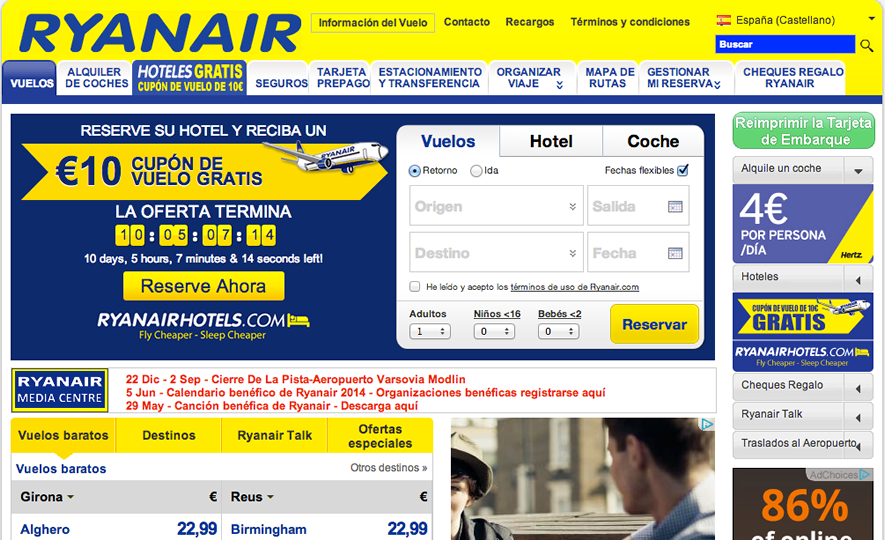 Many of the major players on the Internet today were born as aesthetically ugly websites: Google, Yahoo, eBay . . . They are a good example of this. Being a good boxer, like Foreman, doesn’t guarantee anything. Having an attractive visual design is not a determining factor for success. The strategy you face your competitors and the market with is.

A great many e-commerce websites maintain a very ugly, old design. Their understanding has been that users trust more in interactions and appearances that have become deeply rooted over time than in the potential benefits of new visual proposals.

Another potential benefit of an aesthetically ugly project is the level of expectation we give users that they will find better deals, cheaper flights, etc. The user’s relationship with the product changes. It’s more personal. We are in a small shop with more personal attention, not in the hands of a big, impersonal multinational.

I do not advocate sacrificing visual design as a rule that applies to all projects. Nonetheless, I recognize that many of the ugly, successful projects that we know of have found success by focusing on their product and on their users, without caring about giving battle on the visual field.

This post is directly inspired by Juan Leal´s post, “Why are lousy websites successful?“… If you have arrived here, you must not miss it.