Silverton is a small town in Oregon, the United States. It is a community, attached to its traditions, that barely reaches seven thousand inhabitants. Walking around its streets is like being in a movie from the fifties. If you lived there and you dialed a wrong number, you could still hold a lively conversation with the person on the other line.

Stu Rasmunssen is the proud owner of the only movie theatre in Silverton. Since its construction in 1935, his family has been selling tickets and showing movies for the rest of the townsfolk. The most important moments in Stu’s life have taken place in his movie theatre.

Specifically, the most important moment of his life took place on August 14, 1975. On that day the movie “The Rocky Horror Picture Show” premiered. For the first time, Stu saw a man transformed into a woman. Fort he first time, he heard the word transsexual. Something inside him changed, and it did so forever.

For twenty-five years, Stu Rasmunssen designed and carried out a plan to fit his external masculine image with the feminine mental image he had of himself. His transformation from man to woman began with something as small as a simple nail cut.

A masculine, straight cut became a more rounded and feminine one. Over time, he let his nails grow. Some time later, he started to paint them. From a “masculine” blue, he changed little by little until reaching an intense ruby red.

With the passing of time, he started changing the way promoted new releases in his movie theatre. Stu dressed up like some of the female main characters in these movies. For five days, he walked around the streets transformed into Princess Amidala or dressed as a bride for the movie “My Big Fat Greek Wedding.”

Stu gave his neighbors enough time to adjust to and get used to his changes. Time needed also so our protagonist could slowly and deliberately reinvent himself as a transsexual. Finally, at 52 years of age, Stu decided to undergo a surgical operation and get prosthetic breast implants.

Not everyone agreed with the “New Stu”. Many people stopped going to his movie theatre. Groups of teenagers stopped in front of his house to insult him. In Silverton, as in many small communities, they understand the lives and the sexuality of their neighbors in a very fixed way. It’s easy to imagine that things could end badly for our protagonist.

If I’m telling this story it’s because the worst did not happen. On January 5, 2009, Stu Rasmunssen was elected mayor of Silverton. He was the first openly transsexual mayor in the history of the U.S., and if he were a designer, he would be one of my favorite designers. 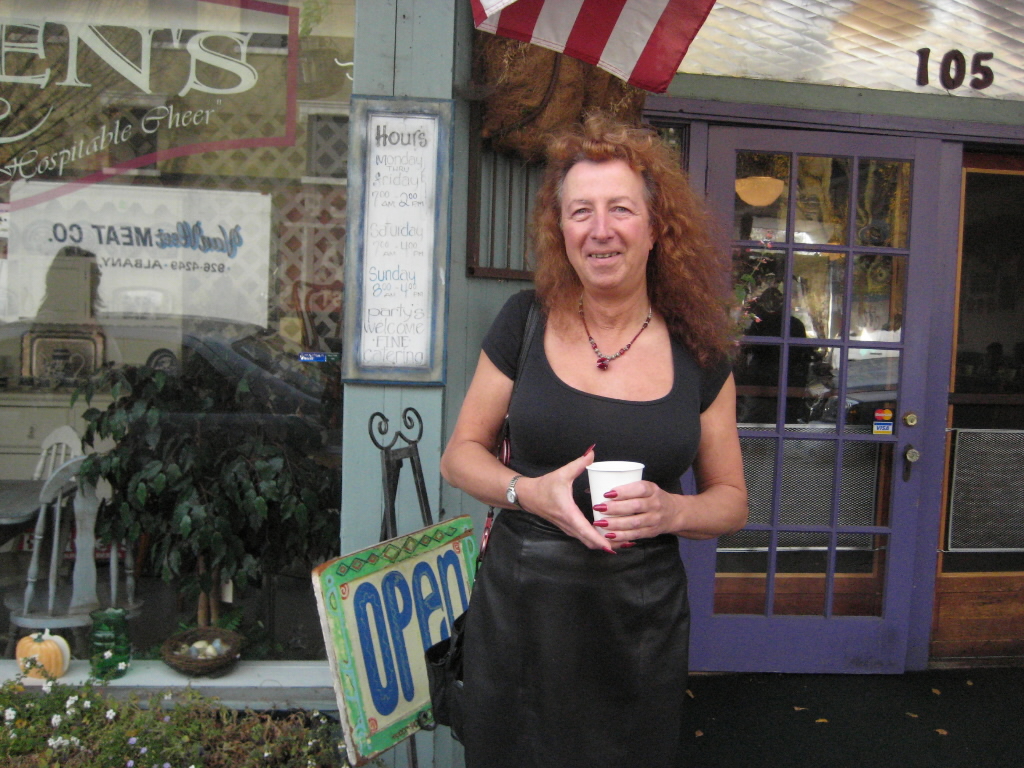 Unfortunately, not everyone who seeks a personal change or transformation is as good a designer as Stu. Increasingly, the challenges we interaction designers face go beyond user experience.

More and more users are seeking tools from digital products that can facilitate and design their personal transformations. The new interaction challenges we face nowadays look a lot like these ones: 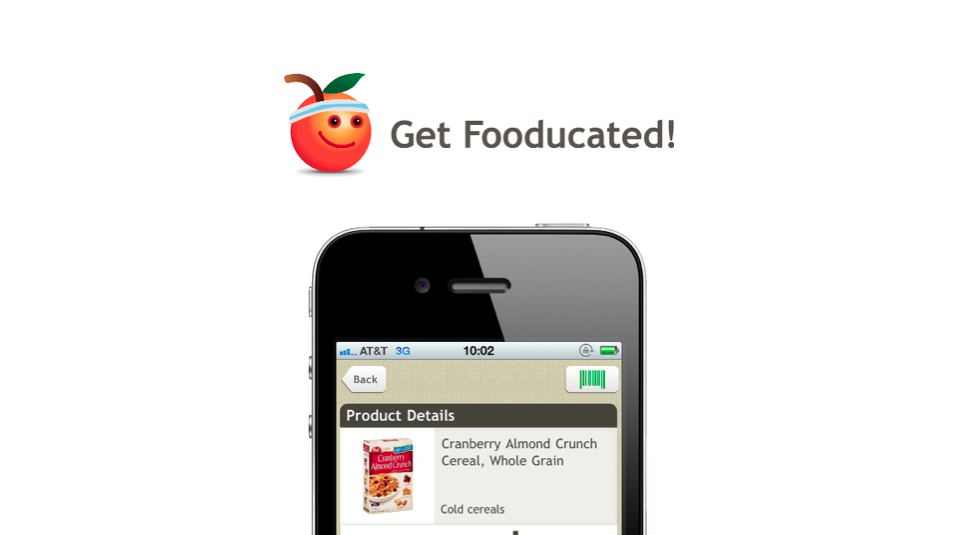 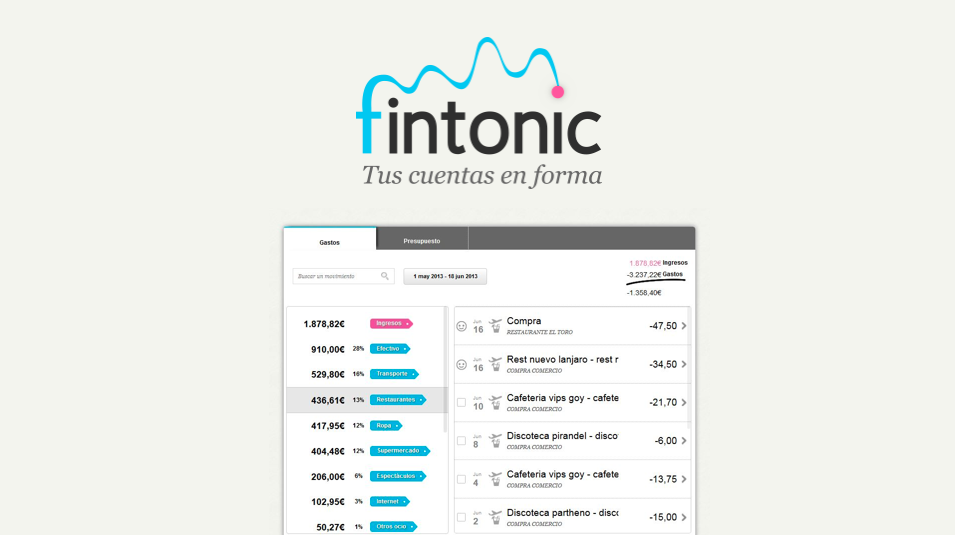 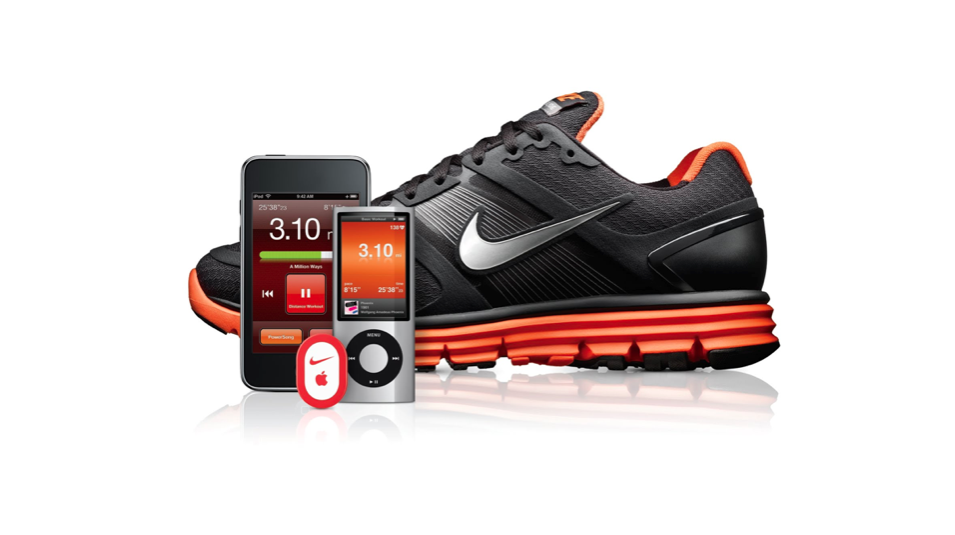 Persuasion. Persuasive design is the solution to a large number of these new challenges. Persuasion is the attempt to change attitudes or behaviors in users without using force or trickery.

It is very important to differentiate between persuading and tricking. Definitely through trickery it is possible to get users to carry out actions, but through trickery we will not create new habits. We do not have an orientation to our users’ objectives—aside from the moral connotations of using these types of techniques.

Nor should persuasion be confused with forcing users to carry out an action. Once again, force is possibly able to change users’ behavior, but certainly it bears no resemblance to persuasion. When we talk about persuasion we are always talking about a change that is voluntary and has been agreed to.

Captology, the Study of Technology as a Source of Persuasion

The theoretical framework that supports this entire post is that which was created by professor BJ Fogg head of the Persuasive Technology Lab at Stanford University. I already talked about professor Fogg’s work in the post entitled BEHAVIOR.

Persuasion is a field that is too broad and generic. I would like to focus on persuasion and its connection to technology. Their intersection lends its name to the field of knowledge called Captology. Captology is the acronym of “Computers as Persuasive Technologies”.

This post deals with the connection that exists between persuasion, technology, and voluntary changes in behavior, which we often refer to as “Behavior Change” or within our sphere of knowledge, “Behavior Design”.

When we talk about “Behavioral Design” at work, the best thing we can do is to start trembling. The first thing out the window is the project’s objectives. Suddenly, everything is abstractions that are impossible to materialize into specific design actions:

The objectives in the abstract prevent us from arriving at precise solutions. We then start to talk about creating “engagement,” being the leading platform in . . . Pure bullshit.

For the rest of this post, I will discuss concrete design techniques that are applicable in our day-to-day work:

A Practical Framework for Understanding Behavior

For a behavior to occur, we need three elements:

With an example we will see it better. You are driving and suddenly a light appears on your dashboard: 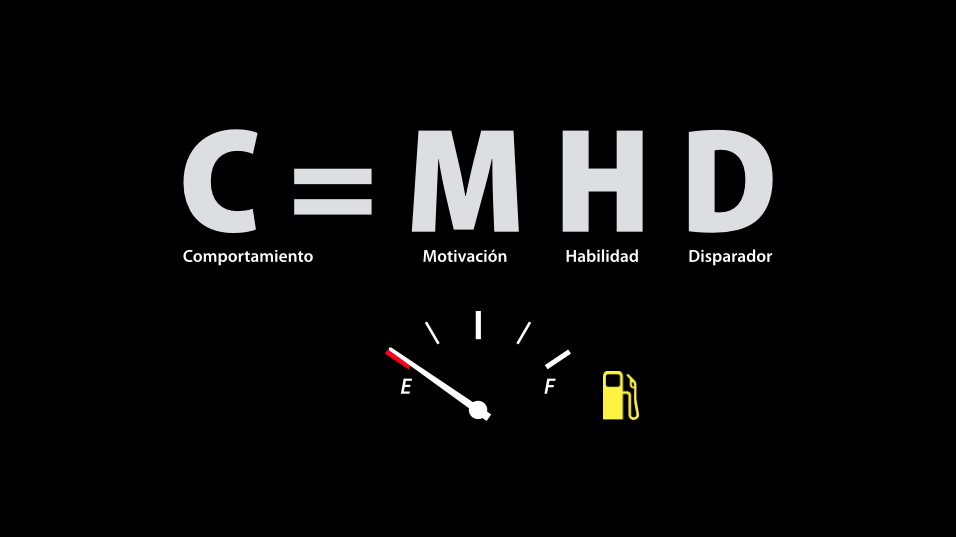 This is our “Call To Action.” The car is telling us to stop and refuel. I don’t want to be stranded in the middle of the road, so my motivation to carry out this task is high. When the light goes on, I pass by a gas station. Now I have enough ability to carry out the action.

Trigger, Motivation and Ability. We don’t need anything else to explain behavior. If we represent these elements on a coordinate axis, we get this: 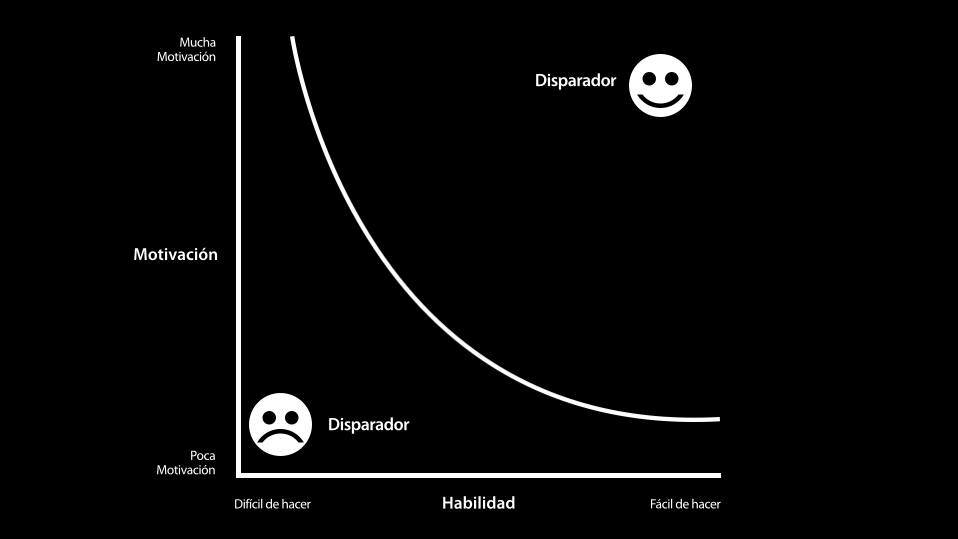 On one axis, we have a user’s motivation, from low motivation to high motivation. On the other, we would have the ability to carry out the task, from difficult to do to easy to do. And when we set off a trigger, we have a zone where the actions occur and another where they do not occur.

With this formula and this graph, we can analyze and carry out tests with users to determine if the user is receiving and understanding our “Call To Action.” We can measure and know if our users are motivated enough.

The Importance of Designing Micro-goals

If we already have a framework to analyze behavior with, the next thing is to understand the importance of designing for micro-goals. If we are able to get our users to reach small objectives, this will push them towards greater goals.

Remember how Stu’s transformation began with a nail cut; afterwards, the objective was to let them grow; afterwards, to paint them . . . When we design for small goals, we are creating new and powerful habits in our users. Conversely, when we ask them to take great leaps in their behavior, this is what happens:

This is how we treat our users many times. We ask them to do things that are too hard for them. We overestimate their abilities to carry out a task.

Simplicity Is Better Than Motivation

What happens when users fall during one of these great leaps? The solution invariably happens due to motivation. We create testimonials pages. We create help manuals. We offer discounts and promotions. Even worse, somebody decides that the leap program is perfect and that the only thing needed is to gamify the entire platform. Mistake.

Motivation does not change our long-term behavior—making a task easier does. Simplicity modifies our behavior much more than motivation. Designing so that things are easier to do makes us do those things more times.

On New Year’s Eve we feel full of the force of energy to start new behavior. Keeping up this degree of energy throughout an entire year is extremely difficult. Going to the gym is the perfect example because we fail when we use motivation and not simplification to reach our objectives.

What happens when a company understands the power of simplification? Something like what happens in Curves, gyms that are exclusively for women. 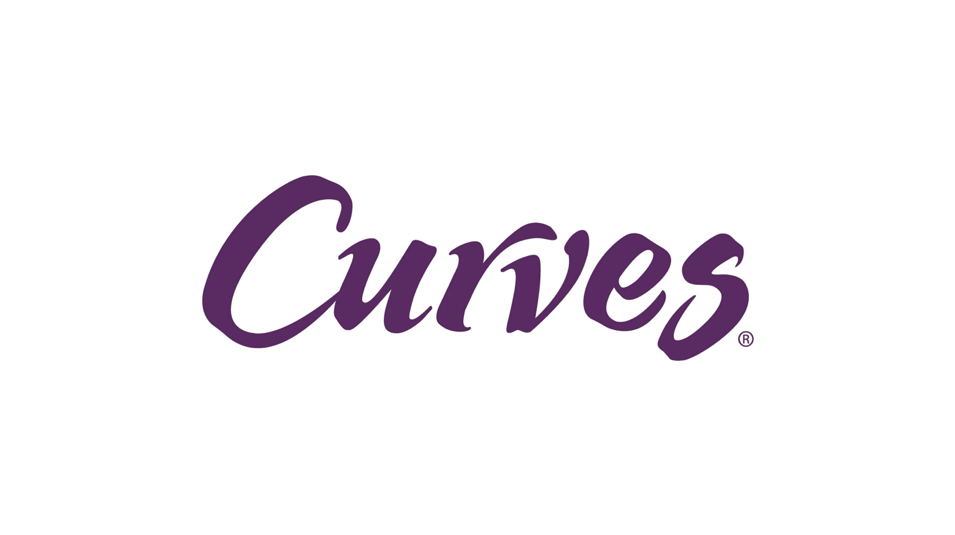 The more we simplify a task, the more possibilities we have that a sufficiently motivated user will do it a greater number of times. We will be creating new habits.

A Sequence of Steps for Persuasive Design

I would like to propose a sequence of steps when using persuasion as a design tool. If they are not the correct steps, at least I am sure they will be a less erroneous sequence.

The first and most important step of all: let’s stop trying to force or trick users to do things they don’t want to do. Let’s research, find the users that want to change their behavior, and focus on them.

Secondly, make sure that users receive and understand your “Call To Action.” What sets off the action is always a trigger. The fuel light is on the dashboard. It has a striking color and when it lights up also a noise goes off that catches our attention.

Thirdly, design goals that are easy to achieve. Divide a behavior as much as you can into smaller behaviors. Remember Stu’s story. Everything began with his nails. Finally, when all else fails, then and only then, start to consider the way to motivate your users.

We are what we do

I firmly believe that we are what we do. Understand design as a tool that persuades, that facilitates users’ actions. I believe it is worth it to use the power of persuasive design with users who want to create new habits in their lives and transform themselves.

Persuasion doesn’t trick or force users to do things that they do not want to do. Stu Rasmunssen is a marvelous example of what happens when people reach their objectives. To change and along the way transform the world we live in.

This entry is the conference that I gave at the UXSpain 2014. You can download the keynote that I use (26,9 Mb).