For some brainy reason, you want to subscribe to “The Economist.” You look for the subscription information, and you find you have three options:

The first thing you think when you see these options is Who is the idiot who chooses Option B? To put your mind at ease, let me tell you that there are no idiots, since no one chooses Opción B. It is highly likely that your option will be C—84% of users prefer it compared to 16% who prefer Option A.

But you still have a doubt… What is Option B doing there? Clearly, it is ridiculous. Let’s get rid of it then. Now the subscription options will be:

The (real) example we are telling you about is what is known as “asymmetric dominante effect” or also the “decoy effect”. In the words of Wikipedia:

“The decoy effect (or asymmetric dominance effect) is the phenomenon whereby consumers will tend to have a specific change in preference between two options when also presented with a third option that is asymmetrically dominated.”

Designing a pricing strategy is part of designing a product or service.. Being honest with our users in the relationship established between what is offered and what is required is fundamental. That being said, there are ways to guide your users’ preferences towards the products or services that we are most interested in promoting.

Here I will show you an example of the “Decoy Effect” applied to usabilia.com prices. The objective of this experiment in their own words:

“Our hypothesis was that by making the small or the large accounts less favorables (decoys), we would push participants to go for the standard accounts.
To achieve we set up three independent tests: no decoy, decoy in large account, decoy in small account. We invited 50 participants to each test. On to the results!” 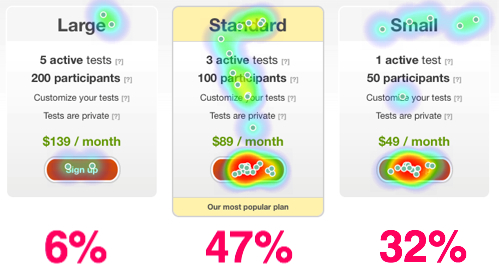 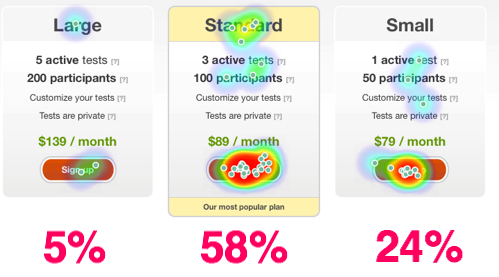 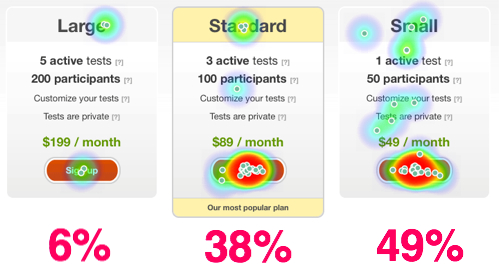 With the option “Decoy To small account” they created enough asymmetry so that users spend $10 more on their Standard Plan. Scary, isn’t it? Usabilia.com’s own conclusions:

The basic idea of economic forecasts is that people behave rationally. Behavioral economics however, studies social effects, cognitive effects and emotional reasons in people’s economic decisions, but without assuming that these are rational. Dan Airely holds that not only do we act irrationally in our economic decisions, we also do it following certain patterns, which he identifies in his delightful book “Predictably Irrational“.

Imagine I offer you an all-expense-paid trip to Roma or a trip to París, also with all expenses paid. These two options are difficult to compare. They both have different languages, different food, different cultures, etc. Now imagine that we add a third option, one that no one would want but that is similar to one of the two previous options. This option would be a trip to Rome with all expenses paid, but which doesn’t include a cup of espresso coffee in the mornings.

Think about this… We could put products on the market that no one wants but that have the effect of helping people choose the product we are interested in. Who wants an iPad mini this Christmas?

If you do not know what the header photo means: THE RUNNING OF THE BULLS IN NEW ORLEANS, a true classic