Theophilus Van Kannel invented and patented the revolving door in 1888. He christened his door the “Storm-door structure.” The first one was installed in 1899. It was the attraction at Rector´s, a restaurant in New York’s Times Square. Legend has it that Theophilus suffered from social phobia. A result of that was his aversion to the entrance doors to buildings. Let’s just say that he was not especially amused by the game of “no, please, you go first.” Furthermore, like a good misogynist, Theophilus hated being polite and opening doors for women. With his invention, in addition to becoming rich, he found a way to escape the social conventions of his time. 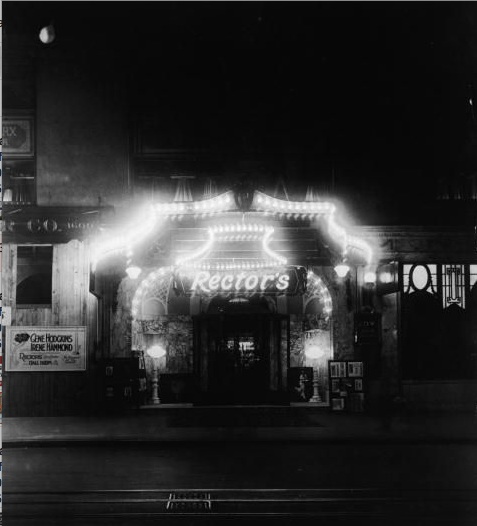 The revolving door is the perfect solution to prevent dirt, cold, rain and noise from entering. It is also the perfect solution from an energy-saving point of view. We are talking about doors that are never open. The only exchange of outdoor and indoor air takes place when entering and exiting the building. The exchange of air is eight times lower with the use of this type of door. This means a considerable savings on heating and air conditioning. In sum, everything about them is perfect. There is only one problem: people do not use them.

Some of them are too heavy and uncomfortable to use. Their compartments, which are too narrow, transmit claustrophobia when you are in them. Then there is the fear of having an accident; getting your arm or leg caught always goes through your mind. If you go into them with another person, the door forces you to be too close together, more than what we consider socially acceptable.

A study conducted in 2006 by a group of students at MIT calculated the lack of use of revolving doors as an extra expense of several thousand dollars per building and year. Only 20% to 30% of the times a person has the possibility to use them are they used. The MIT students tried to increase their use and put up signs like this one: 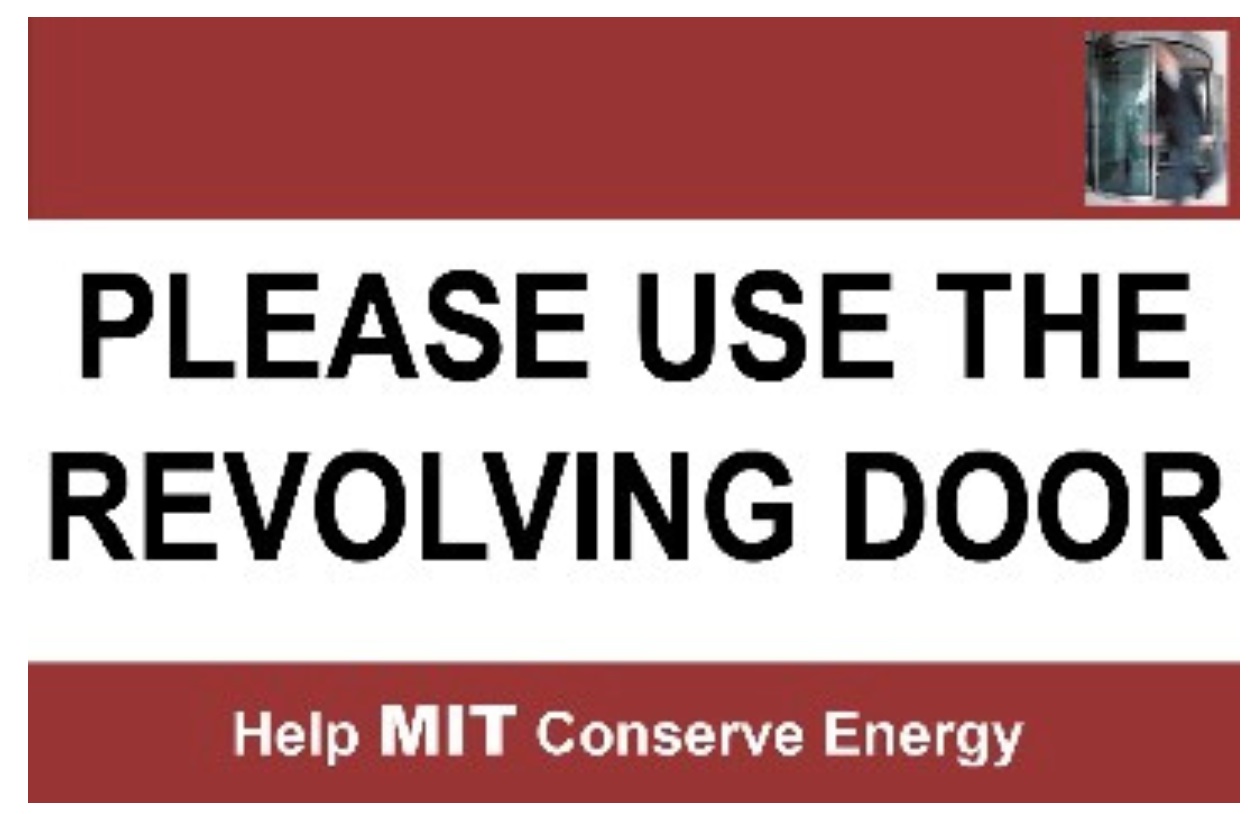 Andrew Shea, New York based designer and author of the book “Designing for social change” replicated this same experiment at Columbia University. After twenty hours of observation, he obtained results similar to those obtained by the MIT students: 28% of people used the revolving doors. After putting up signs, which he himself designed, their use increased up to 71%. Doesn’t it seem amazing to you that a simple sign can change our behavior in such an abrupt way?

This story is directly copied from my favorite blog about design: 99percentinvisible. Do not forget to listen to their podcast.

A model for analyzing behaviors

Although the case of the revolving doors might seem to us nothing more than a curiosity, I think it puts us before important questions. Is there any theoretical basis that explains the way we make decisions? Can our behavior be modified through design? Can actions and behaviors be planned? Yes, they can.

Professor BJ Fogg from Stanford University, defines our behaviors as the union of three forces. They converge at the same moment to produce an action. The three forces are: the motivation to perform a task; the ability or knowledge needed to do it; and finally, we need a trigger or initiator that spurs us on to action. If one of these forces is not present at the right moment, the action will not be carried out.

In addition to motivation, sufficient skill is required to perform the action. The simpler the skill we need, the more likely it is that we will perform an action.

Lastly, a trigger is needed. Without it, the behavior will not take place. Triggers can be external. A fire alarm that spurs us to leave a building would be an example. Other times, the trigger could be found in our daily routine; for example, having a glass of water on your desk at work makes it easier for you to drink more water in your day to day life. If this glass were farther away, you would drink much less water.

With his “Behavior Model” Fogg encourages designers to plan behaviors. Even though I do not have a moral framework within which to apply this knowledge, it is clear that the dissection of behaviors improves our work, identifying the blocks that cause inaction in our users. 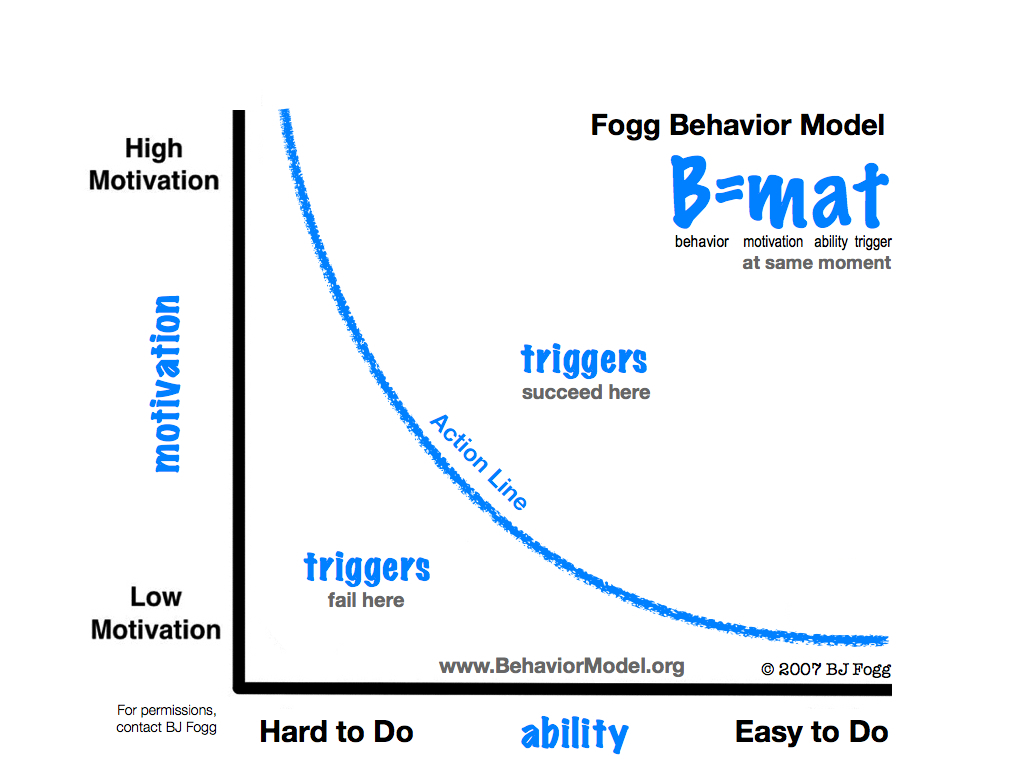 Simplicity can be measured

Simplicity plays a fundamental role in the design of any behavior. As we simplify a task, the likelihood that this action will be performed is much greater. Simplicity modifies our behavior. What is the definition of simplicity? Fogg proposes the following:

“The minimally satisfying solution at the lowest cost”

If it is the minimally satisfying solution at the lowest cost, then we are not talking about the most elegant solution or the definitive one. It is the minimum one that satisfies a problem. Technology plays a fundamental role in the simplification of tasks. The use of new technology explains the increase of new behaviors. The “Buy from Amazon” button is a good example. Simplifying the buying process as much as possible and reducing it to just one click makes the number of items sold increase drastically. Simplicity changes behavior.

For BJ Fogg, simplicity is not intangible; it can be measured. Simplicity is divided into six variables. Time: if an action requires our time, this will be perceived as difficult to do. Money: if someone has limited financial resources, and in order to carry out an action they need an exchange of money, the task will not be simple for them. Physical effort: things that require physical effort are not simple. Brain cycles: if we have to think to carry out a task, it will not be simple. People do not like to think. Social deviance: a solution that goes against what is established, that breaks social norms, might be simpler, but if it causes discomfort, it will not be simpler for the user. Routine: any action that is found within our daily routine will be perceived as simpler. Although it costs them more time or money, people will continue to perceive an action as simpler.

Should we design in order to simplify everything? No. The world of entertainment needs complexity. The more complicated a videogame is, the more fun it will be, within certain limits. Tasks aimed at learning should require effort as well. We are going to need it to solve problems that require our physical or mental capacity. We do not want everything to be simple.

The minimally satisfying solution at the lowest cost depends on each individual and on the context. If I forget my wallet at home, the actions that were simple for me yesterday will not be today. If I am driving, my attention will be on the road. If I receive a call, the action of answering will be complicated. Simplicity, as a characteristic, exists outside the product.

Was it easy to increase the use of revolving doors? Ostensibly, yes. We only needed a sign to encourage people to use them. But…

… That took us a bit longer. To be precise, 114 years and a PhD in Stanford to find the correct equation to resolve it. If you have a revolving door in your building and you want it to be used more, Andrew Shea has a “Revolving door action kit” (.ZIP). Design for change, design for action..